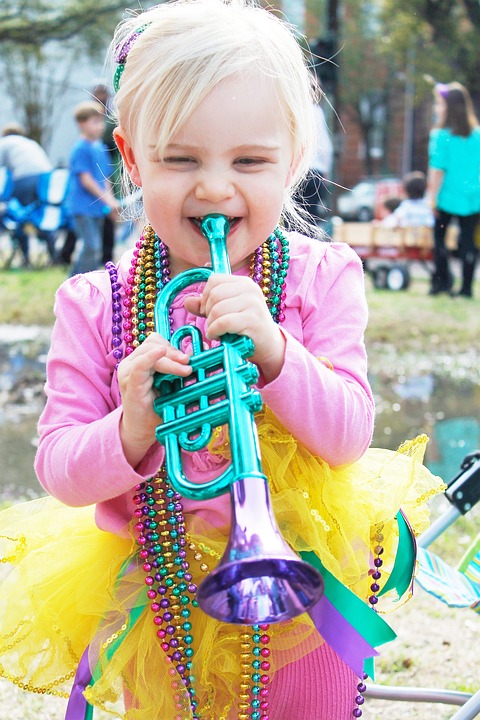 Not to be outdone by the krewes in New Orleans, the communities on the Northshore of New Orleans have 22 parades during the Carnival season. As the krewes that organize these family celebrations announce their 2019 themes, royalty and throws, we’ll post that information here. Click on the links to learn more about the krewes, and check back here often for the latest info.

The St. John Fools of Misrule, whose slogan is “Vivere Vitam Omnino - Live Life Completely,” will feature a “Feast of Fools” for members at 4 p.m. on parade day. The parade rolls Saturday, January 5 at 6 p.m. in Covington. Follow the krewe on Facebook.

Poseidon’s theme for 2019 is “We Will Rock You.” Come see floats based on popular songs such as ZZ Top's "Sharp Dressed Man," "Viva Las Vegas,” "Rock 'n Roll All Night" by KISS, as well as hits by Chicago, Elton John, Foreigner, Huey Lewis, Billy Joel and more. Along with their traditional tridents and medallion beads, throws will include theme items such LED tambourines, LED microphones, plush music tickets, and plush guitars. Doug and Michele Tymkiw will regin as King and Queen Poseidon IV. Come see the Tulane University Marching Band, Clydesdales, the Amelia EarHawts, the Oui Dats, the Mande Milkshakers, the West Jefferson High Marching Bank, the Baker High Marching Band, the Fat City Drum Corps, the Shriners, the US Coast Guard, Mardi Gras Indians and many others. Poseidon’s procession is Saturday, February 16 at 6 p.m.

The theme for the Slidellians’ 2019 parade is “Denim and Diamonds. The krewe parades Sunday, February 17 at 1 p.m.

“Live Your Dream” is the theme for the 2019 Eve parade, put on by this all-women krewe founded 1985. Come see more than 400 members in elaborately decorated sweatshirts parade through the streets of Mandeville at night. The parade includes an annual competition of local and out-of-state marching bands, 22 floats and lots of throws for a fun family night. Eve will hit the streets on February 22 at 7 p.m.

Bark if you love a good parade! Krewe de Paw’s 2019 theme is “Hang Ten.”Decorate a wagon, stroller or cart, stock up on the throws and join the fun, Saturday, February 23 at 10 a.m. in Olde Town Slidell.

This krewe gets the mardigrasneworleans.com award for the best theme on the Northshore this year: “Terrible Theme Park Ideas.” Every year, Push Mow features dozens of humorously themed homemade floats, many based on lawn equipment. The parade begins at Saturday, February 23 at 11 a.m. Roads leading into Abita Springs close about 10:45 p.m.

The colorful boats-only parade cruises the Tchefuncte River. King Neptune’s Marching Society precedes boat parade by marching down Water Street to the reviewing stand. Tchefuncterolls, or should we say “rows,” Saturday, February 23 at 1 p.m. in Madisonville.

Founded in 1965, Olympia the oldest in St. Tammany. The theme for the 2019 parade is “Olympia Stands for the Flag.” The parade will feature 16 krewe and 3 royalty floats with unique, lighted throws, the Tulane University Marching Band, and special appearances by the Disco Amigos, the Laissez Boys and the Budweiser Clydesdales. Have your krewe in Covington on Saturday, February 23 at 6 p.m.

The coed Mystic Krewe of Titans was founded by a group of Carnival veterans who wanted to bring the merriment of Mardi Gras to the streets of Slidell in a high-quality, family-oriented nighttime parade. King & Queen Titans IX are Mr. Legrande Ferguson and Mrs. Lauren Oustalet and the theme is “Where Y’at Nawlins.” Bring your chairs and ice chests to the parade route on Saturday, February 23 at 6:30 p.m.

The 250+ members of Dionysus in Slidell have chosen “Dionysus & the Wise Guys as their 2019 theme. Put Sunday, February 24 at 1 p.m. on your Carnival calendar.

In 2019, Selene, an all-women’s night parade, celebrates their 21st anniversary. The 18-float procession, built by Mardi Gras Decorators, is entitled “Selene Through 20 Years.” Their signature throws are hand-made elaborately decorated purses. Parade-goers can also catch lighted star wands and a variety of specialty beads. The parade rolls Friday, March 1 at 6:30 p.m. in Slidell.

The all-male Original Krewe of Orpheus’ 2019 theme is “Orpheus Goes to the Movies.” Come catch 9 different throws, including beads, swords, lighted items and signature medallions. The parade is scheduled for Friday, March 1 at 7 p.m. in Mandeville.

This fun family parade features trucks, boats, floats, horses and ATV's. It’s free for your krewe to ride, roll or walk. Just bring your own throws and line up by 8:30 a.m. at Bush Rec Center on Hwy 41. The procession kicks off Saturday, March 2 at 9 a.m. in Bush. Learn more.

Mardi Gras Day in Covington includes parades by the Lions Club and Mystic Krewe of Covington followed by a party at Covington Trailhead. The theme for 2019 is “Louisiana Lagniappe.” Come enjoy live music, food and entertainment, along with traditional Mardi Gras floats, antique car clubs, multiple family vehicles, multiple dance groups, and the Saints Super Fans. Prepare to be dazzled by The Ride of the Brotherhood on motorcycles, the Shriners in buggies, and horses from Angel’s Grove Ranch and Horse Rescue. Mardi Gras throws will be plentiful. Carnival in Covington begins Tuesday, March 5, 10 a.m. Learn more.

This fun krewe was founded in 1959 by the civic society. It follows the same route as the Krewe of Olympia. The festivities begin Tuesday, March 5 at 10 a.m.

Formerly known as Krewe of KaaCee, the Mystic Krewe of Covington was founded in 1951 by the Knights of Columbus. It follows Lions parade Tuesday, March 5 at 10:30 a.m.

The Krewe of Chahta’s 2019 theme is “Spirit of the Wind” and is comprised of floats, cars, marching units and horse groups. Chahta rolls Tuesday, March 5 at 1 p.m. in Lacombe.

The Mystic Krewe of Mardi Paws is held one week AFTER Mardi Gras. The theme for 2019 is “Fables, Fairy Tales and Nursery Rhymes.” Tails will wag Sunday, March 10 and 2 p.m. in Mandeville. Learn more.