Although many people around the world have heard of Mardi Gras, there are many questions that surround the event for people who do not live in New Orleans. Below is a list of the most frequently asked questions about Mardi Gras. Still have questions? Contact us and we'll be sure to answer you as soon as possible.

1: Is there an "official" Mardi Gras?

No! Mardi Gras is a holiday, just like Christmas and Easter. It belongs to everyone. Do not believe the claims of businesses who offer "official" Mardi Gras merchandise or an "official" Mardi Gras website. Using the term “official” is just a way for vendors to sell their products or services to those who do not know better. Products or websites are not licensed by the government for Mardi Gras. Each individual parade krewe is responsible for all of its merchandise. In some parts of the country, official organizations control their Mardi Gras celebration, but this is not true in New Orleans.

2: When does Mardi Gras start and end?

The Carnival season always begins on Jan. 6, which is King’s Day (Feast of the Epiphany). Mardi Gras day (Fat Tuesday), however, is on a different day each year.

Fat Tuesday changes every year because Easter Sunday is never on the same Sunday each year. Fat Tuesday is always the day before Ash Wednesday.

Most visitors plan to arrive no later than the Saturday prior to Mardi Gras day and stay through Ash Wednesday. Check out our dates page to see when Fat Tuesday will fall through the next few years.

3: What is the weather usually like during Mardi Gras? What should I pack?

The weather during Mardi Gras can vary from very cold to very warm, almost hot. Sometimes it will change from one extreme to the other during the same day. It’s a good idea to layer your clothes since a chilly morning may turn into a warm afternoon.

Since you will be spending long days outside, pack comfortable shoes and clothes that can get somewhat dirty. Don’t forget to check the forecast for rain. If storms are predicted, then you’ll definitely want to bring a raincoat!

4: Where can I book a room with a balcony to watch the parades go by?

The best option is to reserve a package in the French Quarter or along the parade route that offers a balcony, food and a bathroom pass.

check out some packages

5: How much does it cost to go to Mardi Gras?

It's free! Not only that, but you'll leave with bags of Mardi Gras beads and throws. That's why we call it the "Greatest Free Show on Earth!"

6: I only have limited time. What is the prime time to visit during Mardi Gras?

The weekend before Fat Tuesday is the prime time to visit New Orleans for Mardi Gras. This is the weekend when Bacchus and Endymion, two of the biggest parades of the season, roll down the streets of New Orleans. The streets are packed all day Saturday and Sunday with parade watchers. If you can stay longer than a weekend, Monday (Lundi Gras) and Fat Tuesday are also great days to experience Mardi Gras. Orpheus, another big parade, rolls on that Monday night, and the Zulu Lundi Gras festival goes on all day. On Fat Tuesday, walking around the French Quarter and seeing all of the costumes and masks is a unique and thrilling experience.

7: What happens if there is bad weather?

The parades roll in light rain. The officials will only postpone if the weather is predicted to be severe. The local TV and radio news stations (such as WWL Radio) broadcast the hour-by-hour updates.

8: Can I bring my kids to Mardi Gras?

By all means, yes! Contrary to public perception, Mardi Gras is a family celebration. Those of us who grew up in New Orleans feel guilty once our children have grown up and we continue going to every parade because we used to use "taking the children" as our excuse! Bring big bags (even large garbage bags!) to hold all of the stuff they will catch. Throws often include toys, stuffed animals, beads, and more.

The only place you should avoid with kids is the French Quarter (where no full-size parades pass anyway). We recommend seeing the parades when they begin on St. Charles Avenue near Napoleon since parades can last until 11 p.m. near the end of the route. The Garden District portion of St. Charles is a family area where you will see many families staking out their parade watching position, having picnics, playing ball, and having fun under the beautiful oak trees. You don't have to worry about the streetcars, as they stop running in this area during Mardi Gras.

You may also want to consider taking your kids to the parades in suburban areas like Metairie, which is only 10 minutes away from New Orleans. Metairie's Caesar parade, the Saturday before Mardi Gras weekend, is the parade Disneyworld features on Mardi Gras day. Kids love it!

9: What are the best ways to get around New Orleans once I've arrived?

The best methods of transportation will be via taxi/ride-sharing services, streetcar or rental car depending on where you're staying. Driving your own car and finding parking spots will be difficult.

10: Where should I go if someone needs CPR or first aid during a parade?

First aid stations will be available on the following corners along St. Charles Avenue during many of our larger parades the last two weeks of Mardi Gras season:

Additionally, first aid stations will be available at Orleans Avenue and North Hennessy Street, as well as North Carrolton Avenue and Bienville Street on the Saturday before Mardi Gras for the Endymion parade.

11: When and where do the Mardi Gras Indians parade?

The Mardi Gras Indians only parade on Mardi Gras day and on Super Sunday (generally the Sunday closest to St. Joseph’s Day in March).

The Mardi Gras day routes are not published anywhere, but they happen in and around their inner-city neighborhoods. Some sources say that you will see the Creole Wild West tribe at the corner of LaSalle and 2nd Streets sometime between 9 a.m. and 11 a.m. after the Krewe of Zulu passes by. Other tribes meet at the corner of Claiborne and Orleans following the Zulu parade.

The New Orleans Mardi Gras Indian Council always has their Indian Sunday on the third Sunday of March, around St. Joseph's Day. Their festivities begin at Noon in A. L. Davis Park (at Washington & LaSalle Streets) where the Mardi Gras Indians once again dress in their feathers and suits, and take to the streets to meet other "gangs."

Also, the Tambourine and Fan organizations traditionally hold their "Super Sunday" parade on the Sunday closest to St. Joseph's Day, with the event beginning at Bayou St. John. In recent years, there has been yet a third Super Sunday called Big Sunday that falls in April during the open weekend between French Quarter Festival and Jazz Fest. No specific details are available on these events at this time.

12: Why does Mardi Gras fall on different dates each year?

The date of Mardi Gras changes every year because it's connected to Easter, which can fall on any Sunday between March 23 and April 25. Mardi Gras day always takes place 47 days before Easter.

When is Mardi Gras?

13: Should we purchase seats for a Grandstand, like the parade reviewing stands on St. Charles Avenue? How can I get tickets?

During Mardi Gras parades, seats aren’t a necessity. Most people at the parades will be standing or even jumping for throws—and in between parades, people are walking around and popping into local restaurants for a bite. However, we recommend Grandstands for people who may have trouble standing or walking for longer than an hour at a time.

14: Do I need to buy Mardi Gras beads and merchandise before my visit?

Not unless you are going to be a rider on a float. If you plan to watch the parades during Mardi Gras, you'll catch so much you won't be able to carry it all!

15: How can I find out what this year's Mardi Gras theme will be?

There is not a single official Mardi Gras theme since there is no single organization in charge of Mardi Gras. Each parade krewe decides on its own theme each year, which is often kept secret until the parade. Their costumes, floats, some of their throws, and their "official" Mardi Gras poster (if they have one) reflect this theme. For example, after 9/11, patriotic themes were popular.

16: Can a brand, organization, or nonprofit advertise on a Mardi Gras float?

There is a city ordinance in Orleans Parish that prohibits Mardi Gras from being commercialized, i.e., no advertising is allowed on floats or can be thrown from floats. In addition, some of the Mardi Gras organizations have events outside of their actual parade where sponsors can participate. These include Zulu’s Lundi Gras Festival, Endymion’s big bash before their parade, Metairie’s “Family Gras”, and the ticketed extravaganzas held after some of our parades (such as Bacchus, Endymion, Orpheus).

17: How can my dance team march in a parade?

Most krewes book talent between August and November. If there's a particular krewe you would like to march with let us know and we'll connect you with the right person.

18: How do I become a Mardi Gras vendor?

If you would like to sell Mardi Gras souvenirs or pre-packaged food you'll need a permit from the city of New Orleans. Prices range from $500 to $2,000 depending on whether you'll be walking or have a fixed location. CLICK HERE for permit details.

19: Can I book Mardi Gras Indians for a private event such a wedding?

Contact us and we’ll be happy to put you in touch with the Council. While most Indians do not perform at events, a few do.

Even though every parade is unique, Orpheus, Bacchus, and Endymion feature the most intricate, massive, and extravagant floats.

According to Wikipedia, “While there is no official definition for "super Krewe,” it is generally accepted that a super krewe possesses over 1,000 active dues-paying members and maintains at least 500 riders for its parade each carnival.” Here at MardiGrasNewOrleans.com, we think there’s a little more to it than that.

Along with a large membership, super krewes have huge, double- and triple-decker floats, much sought-after signature throws, and celebrity monarchs. They also are known for their big before and after-parade celebrations with big-name talent (i.e., the Bacchus Bash, the Endymion Extravaganza, and the Orpheuscapade).

Click on the krewe names to learn more about each krewe.

21: Can I purchase a parade schedule?

Arthur Hardy's Mardi Gras Guide is a print publication found in most drug stores that includes more than 50 individual parade profiles and maps.

22: What can I do to keep my family safe at parades?

Cameras are now up along most of the popular New Orleans parade routes and are connected to the city's new real-time monitoring center. Check out our Mardi Gras Parade Tips & Recommendations for tips to enjoy a safe and happy Carnival experience.

23: What should I do with all of the throws? 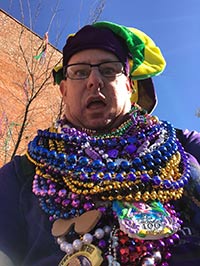 After a few floats, you may have so many beads around your neck, you’ll need a place to put them! Be sure to bring a bag to store all the beads, trinkets, coconuts, and doubloons you’ll catch right off the float.

Not finding the answer you were looking for? Contact Us