"Mardi Gras Indians are secretive because only certain people participated in masking--people with questionable character. In the old day, the Indians were violent. Indians would meet on Mardi Gras; it was a day to settle scores." - Larry Bannock, Past President, New Orleans Mardi Gras Indian Council

Mardi Gras is full of secrets, and the Mardi Gras Indians are as much a part of that secrecy as any other carnival organization. Their parade dates, times and routes are never published in advance, although they do tend to gather in the same areas every year.

The Mardi Gras Indians are comprised, in large part, of the African-American communities of New Orleans's inner city. While these Indians have paraded for well over a century, their parade is perhaps the least recognized Mardi Gras tradition.

"Mardi Gras Indians--the parade most white people don't see. The ceremonial procession is loose, the parade is not scheduled for a particular time or route...that is up to the Big Chief." - Larry Bannock 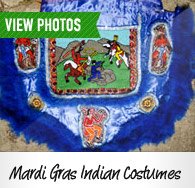 Traditional Mardi Gras organizations form a "krewe." A krewe often names their parade after a particular Roman or Greek mythological hero or god. The ranking structure of a Mardi Gras Krewe is a parody of royalty: King, Queen, Dukes, Knights, and Captains, or some variation of that theme. Many of the more established krewes allow membership by invitation only.

Few in the ghetto felt they could ever participate in the typical New Orleans parade. Historically, slavery and racism were at the root of this cultural separation. The black neighborhoods in New Orleans gradually developed their own style of celebrating Mardi Gras. Their krewes are named for imaginary Indian tribes according to the streets of their ward or gang.

The Mardi Gras Indians named themselves after native Indians to pay them respect for their assistance in escaping the tyranny of slavery. It was often local Indians who accepted slaves into their society when they made a break for freedom. They have never forgotten this support.

Long ago, Mardi Gras was a violent day for many Mardi Gras Indians. It was a day often used to settle scores. The police were often unable to intervene due to the general confusion surrounding Mardi Gras events in the city, when the streets were crowded and everyone was masked. This kept many families away from the "parade," and created much worry and concern for a mother whose children wanted to join the Indians. 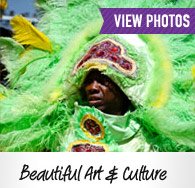 "'I'm gonna mask that morning if it costs me my life!' That morning you pray and ask God to watch over you, cause everybody is bucking for number one." - Larry Bannock

Today when two Mardi Gras Indian tribes pass one another, you will see a living theater of art and culture. Each tribe's style and dress is on display in a friendly but competitive manner. They compare one another's art and craftsmanship.

The Big Chiefs of two different tribes start with a song/chant, ceremonial dance, and threatening challenge to "Humba". The Big Chiefs demand that the other Chief bows and pays respect. The retort is a whoop and equally impressive song and war dance with the reply, "Me no Humba, YOU Humba!"

"You know when you've won, you see it in their eyes." - Larry Bannock

Although there was a history of violence, many now choose to keep this celebration friendly. Each Big Chief will eventually stand back and, with a theatrical display of self-confidence, acknowledge the artistry and craftsmanship of the other chief's suit.

Before the progression can continue, the two Big Chiefs will often comment privately to one another, "Looking good, baby, looking good!"

"After Mardi Gras, you thank GOD that you made it." - Larry Bannock

The good news is Mardi Gras day is no longer a day to "settle scores" among the Mardi Gras Indians. Now that the tradition and practice for the Indians to compare their tribal song, dance, and dress with other tribes as they meet that day, violence is a thing of the past. The Mardi Gras Indian has invested thousands of hours and dollars in the creation of his suit, and will not run the risk of ruining it in a fight. This tradition, rich with folk art and history, is now appreciated by museums and historical societies around the world. It is a remarkable and welcome change from the past.

If you have questions, send us an email.