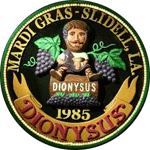 The Krewe of Dionysus was founded in 1985 by a group of Slidell businessmen intent on bringing an old-fashioned, family-oriented Mardi Gras parade to the Camellia City.

Dionysus (Bacchus in Roman Mythology) is the ancient Greek god of fertility and wine, According to legend, he had a dual nature and could bring joy and divine ecstasy, or a brutal and blinding rage, reflecting the dual nature of wine.

The 350+ member krewe parades with around 18 floats, including 11 double-deckers. The king and queen are chosen at the Coronation Ball from the krewe’s maids and members of the King’s Club.