PLEASE NOTE: There will be no New Orleans parades in 2021 due to Covid. 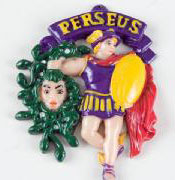 Founded in 1970, the Mystick Krewe of Perseus is Slidell’s oldest Carnival organization. Perseus was the Greek god and slayer of monsters (he beheaded the Gorgon Medusa (yeah, the one with snakes for hair). The son of Zeus and mortal Danaë, Perseus was also the half-brother and great grandfather of Heracles (and you thought your family was complicated.)

Every year, Perseus treats this Northshore community to a thirteen-float parade, with nine double-decker floats. Each float rider constructs his or her own costume. They also host a traditional tableau ball.

Membership in Perseus ranges from 200 to 250 members. They are incorporated as Beau Geste, Inc. Throws include hand-decorated plastic crabs, crab beads and more.