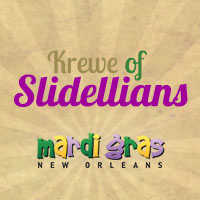 Founded by the Slidell Women's Civic Club in 1947, the Krewe of Slidellians takes the traditional Slidell parade route from Salmen High School to Gause near Hobby Lobby.

Unlike most krewes who pay for their Carnival parades with membership dues and only allow members to ride, this parade is paid for by community sponsors with leased floats, and non-members can ride on their Melting Pot float for a reasonable fee.

The Slidell Women’s Civic Club is a group of vibrant women who have one trait in common: the desire to serve the Slidell community. Along with their parade, they sponsor a bal masque.