While Mardi Gras Day (Fat Tuesday) is February 25 this year, the festivities actually begin much earlier. The fun begins on Twelfth Night, January 6, the official start of Mardi Gras, and around 70 parades follow in February. This month, come experience the traditions, eat a little king cake, and whet your appetite for what’s to come. Here’s what up in January. 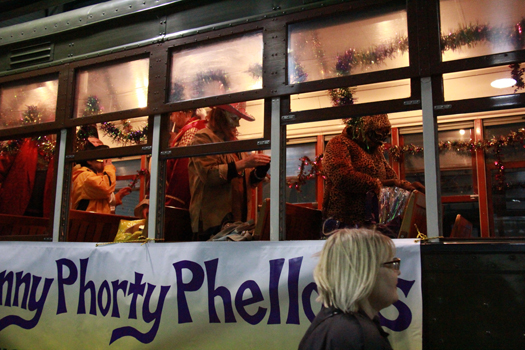 On the Northshore, Carnival is kicked off early by the Fools of Misrule on January 4th, a marching parade founded in 2011 with flambeaux, elaborately costumed krewe members and a brass band. Their motto is "Live life completely." Learn more.

Krewe of Joan of Arc

This annual walking parade, founded in 2008, honors the Patron Saint of France, the Maid of Orléans. Coincidentally, Joan of Arc’s birthday was on January 6th.

After participating in a “Carnival Countdown,” the Phunny Phorty Phellows (PPP) climbs aboard the St. Charles Streetcar for a night filled with merriment and tradition. Their motto is, “A little nonsense now and then is cherished by the best of men.”

The Phellows first hit the streets in 1878 but there was a long break between 1898 and 1981. Krewe members dress in satiric costumes, reflecting the issues of the day. The Queen and “Boss” (their version of a “King”) are determined by whoever finds the babies in two king cakes (very democratic)! The fun starts at 7 p.m. See parade route.

The Société Des Champs Elysée (a.k.a., La Société Pas Si Secrète Des Champs-Élysées orThe Not So Secret Society of the Elysian Fields) was founded in 2017.  This krewe of 40 normally rides the Rampart - St. Claude Avenue Streetcar, passing the Phunny Phorty Phellows on the St. Charles Streetcar at Canal between Carondelet and Rampart for a meeting of the krewes. This year because of the collapse of the Hard Rock Hotel, the krewe will instead stage a rollicking secondlne to their ball. Learn more.

Brush Up on Your Mardi Gras History

Find A Hotel on the Parade Route

Before You Get Back to Work, Get Your Krewe to Mardi Gras World

"We support Mayor Cantrell's efforts to keep the people of New Orleans safe and healthy. During times…