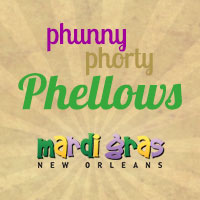 Mardi Gras ends every year at the stroke of midnight with the mayor and police officers riding through the French Quarter on horseback. Here’s how it begins.

Every year on Twelfth Night, the Phunny Phorty Phellows (or PPP) herald the arrival of Carnival by participating in a “Carnival Countdown.” Afterwards, they load up on a streetcar for a merry ride up and down the entire St. Charles Streetcar line. Crowds gather along the tracks to cheer, wave and catch the first beads of Mardi Gras.

The Phellows first took to the streets in 1878 (with a long break that lasted from 1898 until 1981). Because humor and whimsy have been part of the Phunny Phorty tradition since way back, krewe members often dress in satiric costumes that reflect topical issues. Their motto is: "A little nonsense now and then is cherished by the best of men."

The Queen and "Boss" (the Phunny Phorty Phellow’s version of a King) are determined very democratically on the streetcar ride itself. (The title of goes to whoever finds the babies in the two king cakes that are passed around as they toast and drink champagne.) The Storyville Stompers is the official band for the streetcar ride and Benny Grunch and the Bunch play at the Coronation Ball. The krewe takes pride in sending out lovely ball invitations and uses dance cards reminiscent of those from the 1800s.