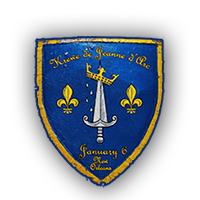 Founded in 2008, Joan of Arc is an annual walking parade honoring our unofficial patron saint, “The Maid of Orleans”. The event melds medieval revelry with the traditions of Mardi Gras. It’s a celebration of the city’s French culture and heritage as well as St Joan of Arc’s birthday which coincides with Twelfth Night.

The procession is inspired by Joan’s time in France in the 1400s, when she liberated the citizens of Orleans, France from British siege. Honorary characters include the Maid of Honor, Joan of Arc, on horseback in a white robe with faux armor breastplate. Midway through the parade, she receives her sword after a blessing at St. Louis Cathedral.

Joan is joined on the parade route by Queen Yolande of Aragon and King Charles VII, the “Dauphin” who became King as a result of Joan of Arc’s efforts. The Maid of Honor is chosen in a student Joan competition, while the Queen and King are community leaders. Parade goers dress in gold to look like the statue of Joan in the French Quarter, a gift to the City of New Orleans from France in the 1950s.