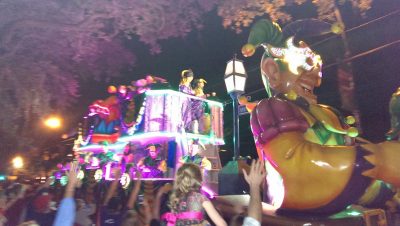 Epiphany, January 6, is the official end of the Christmas season, but it also kicks off Carnival season in New Orleans. Although some people use Carnival and Mardi Gras interchangeably, they are actually different things. Carnival is a time to eat, drink and be merry before the rigorous fasting and sacrifice during Lent. It is filled with parades, balls and other celebrations leading up to Mardi Gras, which is French for “Fat Tuesday.” Mardi Gras is always the Tuesday before Ash Wednesday. Carnival officially ends at midnight on Fat Tuesday and Lent begins.

Phunny Phorty Fellows, a band of Twelfth Night revelers, holds its annual ride on the St. Charles Streetcar January 6, also called Twelfth Night. In recent years, they have been followed by two other streetcar parades – the Funky Uptown Krewe, also on the St. Charles line and the Société des Champs Elysée on the Rampart-St. Claude Streetcar. Joan of Arc’s birthday is also celebrated on Epiphany. The Krewe of Joan of Arc features historical characters in medieval dress parading through the French Quarter.