Krewe of the Rolling Elvi 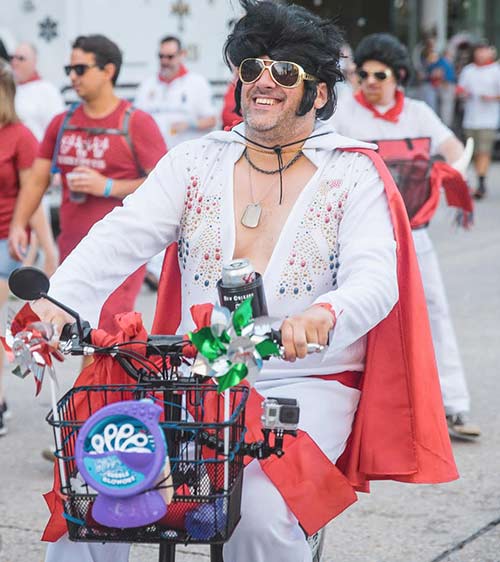 About the Krewe of the Rolling Elvi

Since Elvis Presley died in 1977, probably more tributes have been paid to him than just about anybody else. You’ve got your Elvis impersonators, Elvis shrines, Elvis books, Elvis costumes and, of course, the shrine of all Elvis shrines, his home Graceland. In New Orleans, we honor the King, too. Only we go about it a little differently. (And, yes, there’s no “s” on the end of Mr. Presley’s name in the Krewe’s title.)

Meet the Krewe of the Rolling Elvi

This fun-focused group was founded in 2003 to pay homage to the only King of Rock and Roll in what the Krewe calls “the most fitting way possible: on scooters.” This takes place during the world-famous Mardi Gras celebration, which explodes every year on “Fat Tuesday,” the day before Ash Wednesday in February.

The Krewe is made up of all kinds of people who register to take part in the annual festivities. There are various get-togethers and calendar items during the year, but when Mardi Gras rolls around the Krewe really gets rolling.

What do Elvis and scooters have to do with each other?

You might be wondering how an Elvis tribute on scooters makes sense. If you think about it from a New Orleans standpoint, it’s pretty clear. If Santa Fe, New Mexico, is called “the City Different,” then we can call New Orleans “the City Very Different.” Here, we like to go about things in unique ways. And we like everybody to be able to participate. Celebrations are about people and community and having fun.

So the Krewe of the Rolling Elvi hop on their scooters and tear up the streets. It’s pretty amazing to see a huge contingent of Elvises riding along, waving to the crowds, having a spectacular time and basically creating a spectacle. Most of the Krewe does their best to fashion their look and attire after the King, and most of them pull it off quite effectively.

And to make matters better, following behind the Krewe is a flatbed full of Pricillas, honoring Pricilla Presley, the widow of Elvis. Here you’ll find women portraying their own unique versions of Ms. Presley, most of them a little over-the-top, but it’s Mardi Gras, so nobody cares if “Pricilla” shows up with too much makeup or too much skin.

Get on the Krewe

Memberships are accepted from July 1 to July 21. Go to the Krewe of the Rolling Elvi websitefor more information. The Krewe says the best way to become a member is to hook up with an existing member and have them sponsor you. You’ll need a scooter, but you can rent one of those. You’ll also need some kind of outfit that makes you look like the King, and you can probably rent one of those, too.

Get involved, and have a good time. And as the King would say, thank you, thankyouverymuch.