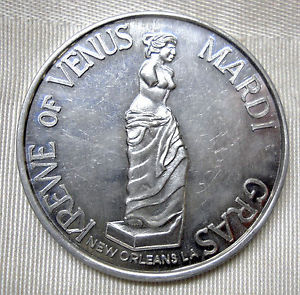 “It’s undignified, women riding on floats. They do not belong.” – Man at the first Venus parade in 1941

On February 23, 1941, the 125-member Krewe of Venus – the first female parading organization in New Orleans history – took to the streets on a dozen floats rented from the Knights of Babylon. Although it was raining, and some protesters threw eggs and tomatoes, Venus continued to roll down the parade route, right into the history books.

The Inaugural Parade and Ball

The women of Venus, mostly local businesswomen, chose “Goddesses” as their first parade theme. They kept it under cover until parade day, proving, according to a Times-Picayune writer that “women can keep a secret."

By all accounts, the first Venus parade was a site to behold. A reporter for The Item wrote, "The women climbed aboard the floats yesterday and threw the gorgeous parade of Venus right into the teeth of the fuddy-duddies who said it couldn't be done.”

Unfortunately, things did get a little nasty. Along with throwing things at the riders (isn’t it supposed to be the other way around?),members of the crowd tossed around wisecracks like “Swing it sister!” and "Hey grandma, put some life in it."

Despite everything, the first Venus Queen Geraldine Mills had a wonderful time. At the ball that night at the Municipal Auditorium, her boyfriend surprised her with an engagement ring. You can’t make this stuff up.

The Rest of the Story

Although World War II put Mardi Gras on hold until 1946, when the parades rolled again Venus was there. By 1958, Venus had a reputation for throwing one of Carnival’s most beautiful parades.

According to The Item, at the first parade Venus threw everything “but the glitter off the floats.” By 1962, they were throwing doubloons featuring a different woman each year, including one series featuring the Queens of England and another with the First Ladies of the United States.

In 1991, the 275-member krewe celebrated its 50th anniversary with the theme “Legends in Gold.” The parade included 20 floats and 14 marching bands, and queens from past years were presented at the bal masque.

Due to declining membership, Venus rolled for the last time in 1992. Still, no one will ever forget how they knocked down Mardi Gras barricades in 1941, paving the way for the female krewes that would to follow. Iris, Helios, Diana, Pandora, Cleopatra, Nyx, Femme Fatale, Athena...without Venus, Muses might have never gotten that glittering foot in the door.